Back in the year 2007, HDfury surprised the HT scene with the release of the HDfury1, at that time it was the world smallest and most powerful HDMI to RGBHV converter available thank to JohnHWman who did the initial design.

7 years later, HDfury1 is still in our catalog, however, we will shortly run out of stock since the ICs used in this design are yet very hard to get and their production ended. It is with great motivation that our team revisited the concept of designing a small but yet powerful converter at an affordable cost.

With no surprise, one of the missing feature of the initial HDF1 design was the lack of audio output (Original HDF1 was purely a video device, it would not handle any sound at all, sound must be taken from the source directly). Another interesting feature for RGBHV displays is the Gamma-X correction, which until now required a dedicated accessories known as Gamma-X.

We are proud to announce that we combined a HDMI to RGBHV converter with analog sound output and Gamma-X feature integrated within an enclosure which is smaller than the original HDF1 ! 😉
Last but not least, the power consumption is so low that you can run the device without extra power source from most of the HDMI sources out there.

The end results is an affordable tiny converter (US$ 89 including shipping) that offer a Gamma-X correction integrated for less than the cost of a standalone Gamma-X correction device. A perfect companion for entry level CRT PJ and nowadays cheap CRT monitor.

Finally, the HDfury brand becomes available for everyone through this first Budget HDfury release.

Since most of the work was not done on the performance aspect (like recent HDfury devices such as HDfury4 or Splitter 4K) but rather on cutting cost down while keeping attractive features and new innovations (gamma-x embedded), we decided that such product will offer a Green Led instead of the classic blue one that you have seen in the past. All next Budget HDfury devices will also come with a green led, while we will keep the blue one for the performance development.

Below is a comparison between the original HDF1 design from 2007 and our revisited design, the 2014 brand new Nano GX, Enjoy! 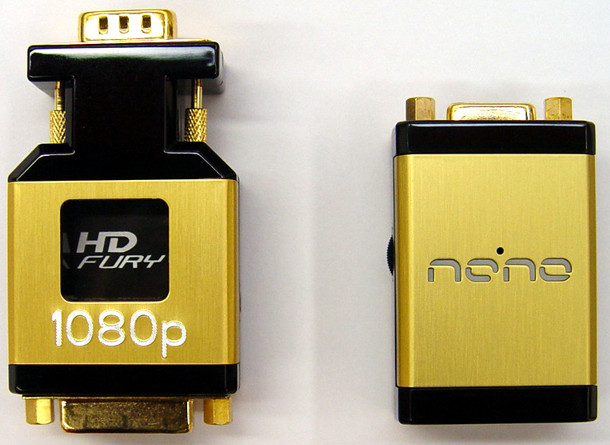 – NOTHING BUT THE BEST –

Team HDfury have a proven successful history in designing the most advanced video converters ever!

HDfury products are endorsed and acclaimed by top notch calibrators and installers on a global scale.

Our HDfury devices are though, made and tested by and for HT addicts&hobbyists.

We ship worldwide in express with tracking number. It reaches any place in the world in 2-4 days MAX.

Our price includes shipping in Express! We offer trade-in, upgrade and replacement service to our customers!

HDfury unleash your full display capabilities and give a new life to your existing hardware!

WEBSITE IS UNDER MAINTENANCE, SORRY FOR THE INCONVENIENCE, ORDER CAN BE PLACED AS GUEST. Dismiss